After a year hiatus, 2012 shaped up as the rebirth of the Montreal Angels. The team took the bold step of redesigning their playing strip, breaking from the iconic blue and white jersey shared with the Quebec Saints, opting for a fresh new and distinctive purple, white and black uniform.

The Angels kicked off the year with a tri-series Pre-Season cup against the Boston Lady Demons and New York Magpies. With a host of new faces the Angels claimed the cup defeating both visiting teams by five goals. It would be the start of a busy year of women's football for the Montreal squad.

The Angels formed a partnership with the newly former Ottawa Swans women's team that competed in the OAFL. The league had expanded from three teams in 2011 to six for the 2012 season. The Angels would on many occasions provide half of the team, and by mid-season the new Angel-Swans partnership had nestled in to second place on the OAFL women's ladder with an impressive 4-1 record. Ottawa Swan's men's coach Chris 'Google' McLean also taking on the role as women's coach. Montreal Angel Aimee Legault amongst the league leading goal kickers.

On June 30th the Angels travelled south to play a Tri-Series tournament in Boston against the Lady Demons and Lady Magpies in a repeat of the AFL Quebec Pre-Season Cup. This time on home soil the Boston Lady Demons proved a formidable force, the Angels surviving the brave home team to escape with a 5 point victory. The Angels would go on to defeat the New York squad by 29 points and claim tournament honours. Margo Legault was crowned MVP for the tournament while Tara Cools-Lartigue received the "Breakout Player" award for another stellar effort in her debut year.

The Angel/Swans finished the OAFL season in second place with a final record of 7-2 (two games won by forfeit). In the first week of finals the team were narrowly defeated by the High Park Demons losing 6.4 (40) to 6.6 (42). What had been a promising inaugural season came crashing down in week two as the Angel/Swans were defeated by the Hamilton Wildcats who advanced to the Grand Final to take on the Demons. High Park eventually going on to claim the crown.

Five Angels represented Canada at the 49th Parallel Cup in both the main team and development squad. 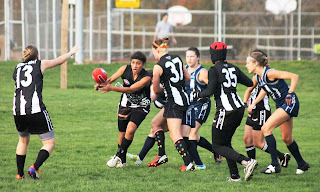 The Angels once again ended their year at the U.S Nationals, this time held in Mason, Ohio. Belzie and Allbon-Sargeant teaming up with the New York Magpies. Losses to Calgary and Minnesota relegated the team to bottom of their pool and a play-off to avoid last place on day two against Sacramento. With both Angels key players for the combined outfit the Angel/Magpies defeated the Sacramento squad to claim their only victory of the tournament.

2011 saw the creation of a women's division in the Ontario AFL. With the 550km distance to Toronto too great for the Angels to enter a squad, and waning numbers making any travel difficult, the Angels were left with no opponents and little opportunity to travel to find one. The remaining Angels were absorbed into the ECAFL teams, playing out the season alongside the men.

Lindsay Belzie had starred for the Angels in the previous year's Canadian National tournament and after attending national squad try-outs was selected for the Canadian Northern Lights team for IC11. She would join Margo and Aimee Legault, all three women travelling to Sydney, Australia to compete for the 2011 cup.

The Canadian women's team was coached by Tristan Waldock, the coach of the Edmonton Emus who had led his charges against the Angels less than 12 months prior in Montreal. He and his coaching panel selected Aimee Legault as the captain of the Northern Lights. The Northern Lights lost to Ireland in their first match before defeating the United States, Papua New Guinea and an Australian Indigenous and Multicultural team. Their three victories placed them second in the pool and earned them a place in the Grand Final with Ireland. In a tight affair, the Irish Banshees defeated Canada for the second time claiming the inaugural women's International Cup of Australian Football.

Back in Montreal, Margo Legault completed a stellar year claiming the Angel of the year award for the first time, Mimi Eboka taking out the coaches award.

Three Angels once again headed to the U.S Nationals and were combined with the New York Magpies. The combination proved a good one, the team making the women's final before losing to defending champions the Denver Lady Bulldogs.
Posted by Neotraveler5 at 12:06 PM

The ECAFL Preseason Cup expanded to include a women's cup for the first time in 2010, the Angels taking on the Toronto Central Blues. On home soil the Angels were too strong, winning two matches by an aggregate of 47 points and claiming the silverware.

After several false starts the Angels made their first trek to Toronto mid-season to tackle the Blues. In a bruising affair the Angels prevailed again, asserting themselves as the undisputed number 1 women's team in the region.

Having earned national selection on the back of fantastic performances at the previous years U.S Nationals, Margo and Aimee Legault debuted for Canada at the 49th Parallel Cup. The Canadians defeated the U.S for the first time, the Legault sisters both featuring amongst the team's best players.

After months of lobbying Montreal was awarded the 2010 Canadian Women's Nationals. Amid some controversy, Calgary, the 2009 champions elected to focus their efforts on the U.S Nationals and skip the tournament. Further bad news was to follow as the Toronto Central Blues also withdrew. It was left to the Edmonton Emus to fly over 3,000km to contest the cup. The underdog Angels captained by Margo Legault would go on to upset the travel weary Emus claiming the second annual Canadian National Championship.

The year once again rounded out at the U.S Nationals where three Angels would form a partnership with Calgary in somewhat of a Canadian super team. The combination worked wonders, the Calgary/Montreal combine team making the women's final but falling agonisingly short by a single point.
Posted by Neotraveler5 at 11:32 AM

After having several women join Quebec Saints training in 2008, the idea was raised about starting a full-time stand alone women's team for the 2009 season. The team was named the 'Montreal Angels' in line with theme of the flagship men's team name the Saints. The Angels would also wear the same uniform as the men's squad.

After a successful recruiting campaign and many training sessions teaching the new women recruits the basics of the game, the Angels has amassed enough players to schedule their first intra-club match. This took place on the 12th of July, 2009 under the ECAFL banner (now AFL Quebec). The Angels were split into two squads, and an Angels v Devils match was played. The game was an astounding success. With only a handful of seconds on the clock and trailing by 5 points the Angels won a clearance and snapped a shot on goal. The ball skidded toward the goal line in what seemed a certain goal. The ball brushed the goal post thereby registering only one behind, the Devils claiming a heart stopping 4 point victory.

On August 16th the Angels squared off against the Montreal Shamrocks GAA women's team. Under the co-coaching guidance of Ben Vawser and Carl Ferreri, it was another epic battle, the Angels pulling out all stops to come from behind in the last quarter and clinch a one point victory. The match against the Shamrocks would be the beginning of a strong partnership between the two clubs, Shamrocks players featuring strongly in Angels colours as the the squad broaden its horizons and looked for opponents outside the province.

The Toronto Central Blues had also launched a women's team, and on August 22nd both clubs organized a match as the curtain raiser to the Quebec Saints v Central Blues OAFL Division 2 match. This time with Cameron Stark at the helm the Angels routed the Blues and stormed home to an impressive 75 point victory.

The year would finish with three Angels heading to Mason, Ohio for the U.S Nationals. As part of a combine team along with Sacramento and Toronto the Angels were only able to record a single victory during the tournament.

The year came to a close with Aimee Legault being named Montreal Angel of the year.

Aimee's 12 goals (including a club record of 7 goals in one game) were enough to again top the club's goal kicking table for 2010.

The inaugural year of women's footy in Quebec saw the Montreal Angels participate in three matches. Claiming the club's first ever 'Montreal Angel of the Year Award' as the team's MVP was Aimee Legault. Aimee was outstanding playing in the midfield, she participated in all three matches with hauls of 2, 3 and 4 goals to finish the year with 9.

Aimee's 9 goals were also enough to top the club's goal kicking table for 2009.